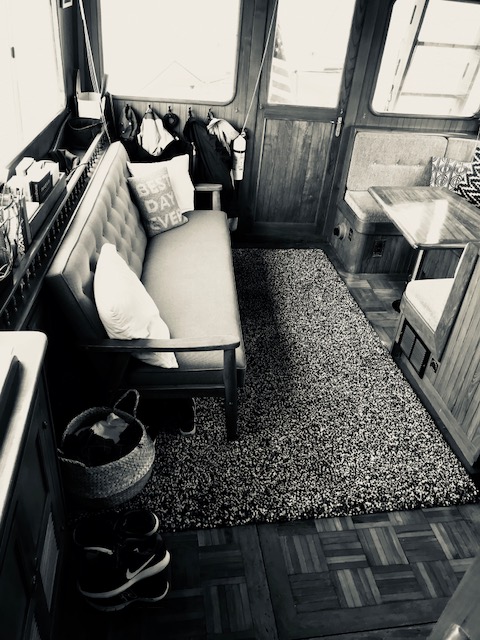 Leaving and pulling into our slip is always a high stress situation. We are a 40′ boat – technically more if you count the swim platform and dingy hanging off the back, so lets say 42′ (which is the overall length – or LOA that I give to marinas when reserving a slip). We are also 13 feet wide, in a 15 foot wide slip. You read that right. We’ve got about a foot on either side of the boat. Basically – enough room for fenders.  (And don’t get me started on the A frame structure of our slip that takes everything to a whole new level). So, try to picture a 42 foot boat backing out, or heading into a 50 foot waterway and needing to make two 90 degree turn to get into or out of Lake Union.

The first time we ever came into our slip was the day we brought our boat up from Olympia.  Our broker had secured us temporary covered moorage (covered was key as our deck needed some work) on Lake Union. I don’t think our broker even knew how difficult it would be to get into our slip, because it was also the first time he had ever seen it.  I recall how dicey it was getting in and remember him uttering the words: “there’s nothing I can do about it” (referring to the winds and currents as we came in that were really blowing us off coming in cleanly). Which at the time, I couldn’t grasp how there was nothing you could do about it, but after a year of going into and out of this slip, I get it now. Sometimes there really is nothing you can do about it. You’re at the mercy of so many things: wind, current, small space and slow speed. Once in our slip, I thought – “Terrific. We own a boat and have a spot on the very coveted Lake Union, but will never be able to get it out of this slip again”. I seriously thought we’d have to hire our broker to get us out again whenever we wanted to go for a cruise.

The short version is that we did indeed learn to get into and out of our own slip, but there was a lot of yelling in between.

Our first few times in and out were comical (in hindsight, naturally).  Once the engines were started up, we’d need to close the salon door so all the fumes wouldn’t go inside the boat and trigger the smoke alarms. So, I’d be in the cockpit (on the stern) and then open the door and yell at the top of my lungs to Steven up in the helm anything from:

“you’re super close to the boat in back”

Always with our boat hook at the ready to fend off from whatever may be in our way or vice versa.

We had no idea what we were doing or how to communicate with each other, but it involved a lot of yelling over the engine noise when I was on the stern and hand signals when I was on the bow. We had some hand signals figured out while pulling up anchor, and heading into Lake Union, but mostly it was frantic estimation and yelling (on my part!).

We finally purchased a headset, which has been a life (marriage) saver. So now – whenever we are docking, undocking, anchoring, pulling up – basically, anytime we are working on the boat, we’ve got the headsets synced.  There’s no more yelling, we can just talk to each other with normal voices. As someone who talks to themselves way more than she’d like to admit, I love having the headset on -there’s always someone there to answer questions and chat with while I organize the stern lines and pull up (or put out) the fenders, or talk about the folks in the very little boat that are trying to get into the locks before the big boats.

Once we had the headsets and we weren’t just yelling nonsensical shit at each other, I understood that Steven wanted very specific distances from things – the dock, another boat, etc. My assurances of: “you’re good babe”, or “you’re kinda close” weren’t cutting it. He wanted to know exactly how far away we were from something.

This was actually super difficult for me. I couldn’t estimate distances. Seriously, could not give him an estimate.  Even with the headsets on, docking and undocking was still stressful – I couldn’t think fast enough when he’d say “how many feet away am I?”

And so while backing in to a stern tie one day in Eagle Harbor on Bainbridge Island, I’m on the stern so I can throw someone our line, and he says, as I knew he’d say –  “how far am I from the dock”?

And I’m looking, and don’t exactly know – but as someone who really, really loves rearranging furniture at home, I knew exactly what would fit in the spot between the boat and the dock and said,

This made perfect sense to him, and a new unit of measurement for Fortitude was born. We sometimes joke now about what kind of couch – A loveseat? A large sectional? A club chair? Figure if I ever say a barstool, we’re probably too close.

View all posts by suzannetwebster